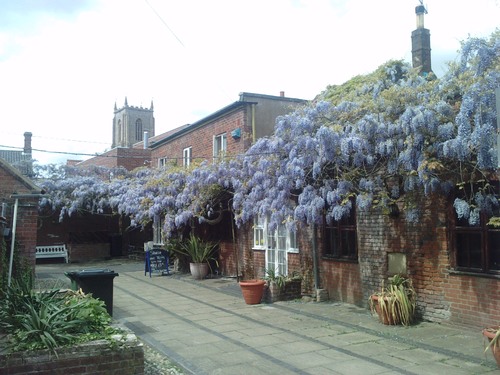 If only life could be lived in that one and half glasses of red wine mood. Less would not achieve it, more would destroy it.

It was when I had achieved that reflective precariously balanced state that I remembered the evening I first saw Jess it was a spring evening in the upstairs room over a town centre pub that was the venue for The Garret the local jazz club. Some of the lads obviously knew her and she was prevailed upon to sing with the band. She had the sort of voice nurtured on honey and matured on cigarettes and hard spirits. A voice that would haunt your dreams and play havoc with your libido. She spell bound the gathered audience with a rendition of “Weeping Willow Blues” that would have melted solid granite and I was hooked.

Now at that time I was a pimply faced grammar schoolboy awaiting my GCE results and with no idea what the future would hold for me but listening to Jess I fell in love for the first, but not the last, time. It should have been a turning point for me but I lacked the courage to dare to live and I drifted into a career in the office of a local business and worked my way up to office manager, making a living but not daring to make a life.

I still regularly frequented The Garret but by now Jess was a much recorded Jazz singer with one of the top British Trad bands.

I married in my late twenties to a delightful young lady who proved to be an equally delightful wife and we settled into a comfortable groove which, too late, we both realised that what had once been a groove had deepened and become a rut .

It was then that two events threw me into a turmoil of despair and despondency the first was the worst thing that has ever happened to me my wife, my soulmate fell victim to the dreaded big C and just a few months later the local company where I worked went belly up; it had been on the cards since the business had been passed on to the former owner’s son who had proved to be a lazy spendthrift with no idea of how to run a business.

So there we have it one tragic event was an unexpected shock the other a well signposted disaster. For several months I drifted and drank until one morning I woke up and realised that I really had to make a supreme effort and as I was being told by my friends, most of whom were equally stuck in their own ruts, “to get a life”.

But now with some funds in the Bank and a paid off mortgage did I have the courage to “to get a life” or would I once again settle for making a living? One thing was for sure I had to do something or I would end up dependent on a diet of wine and anti-depressants but what to do?

Apart from the usual things respectable married couples did, gardening, DIY, home-making dining out and planning the next annual holiday the only real hobbies I had were Jazz, red wine and cooking. It was then that I remembered that far off evening at The Garret and the incredible voice that I’d heard. I wondered could I open a club devoted to Jazz, wine and simple food and could I make it pay its way if I did? Still I thought just looking into the idea would stop me wallowing in self pity and give purpose to my being.

For weeks I no more than thought about the idea and in that one and half glasses of red wine mood I imagined running a bistro style jazz venue serving cheap well cooked food together with equally good jazz.

Each time I achieved the one and half glasses of red wine mood this daydream became more vivid with more details fleshed out so after a few weeks all that was missing was the courage to pursue the dream and the knowledge needed to make it a reality. My drinking had continued but now I sought the “mood” not oblivion. And so it would have continued a glorious but unattained daydream to be constantly revisited had it not been for fate and a chance meeting.

Moving on a few weeks and I found myself seated at a table under trees outside a beamed Tudor restaurant drinking coffee and watching a young man sketching the scene before him. It was the sort of day that Mediterranean towns take in their stride and make the very best of but these days are wasted on the English who seem to lack the knowhow and even constant holidays to where the sun nearly always shines fail to correct this failing. Seated at another table three Irishman that I had seen earlier refurbishing a nearby petrol station were enjoying their lunch break. All was quiet and all that was missing was the gentle trill of cicadas. After a while one of their trio pulled out a piccolo from his pocket and started to play a gentle Irish folk song his companions started to sing the words in gentle quiet tones. People listened and enjoyed the singing the sketcher continued his sketching and in my mind other pieces in my one and half glasses of red wine dream begun to fall into place.

Back home a setting for my dream needed to be found and a wisteria covered courtyard just off the High Street came to mind the courtyard could be equipped with tables under the wisteria and the low long building at the rear of the courtyard could be converted to form the Bistro and Jazz venue the name I had already decided on was to be The Petite Fleur. A man to sketch the guests would add to the ambience in a Toulouse Lautrec kind of way. My one and half glasses of red wine daydream remained only a dream but that dream was shaping up and fleshing out nicely. There would be different jazz performers and when there was no live act then Sidney Bechet tapes would provide background music and help to complement and set the mood.

All was set my dream needed only confidence and courage but these were still sadly lacking. Then a chance encounter and I revealed my thoughts and daydreams to a friend of a friend; this lady gently teased the story of my dream from me right back to where it all begun with that incredible night at the Garrett and the now famous Jess.  A few weeks passed by and this lady Penny, as her name proved to be, telephoned me and invited me to have lunch with her and a few of her associates at which point I did wonder where this was all leading.  Lunch turned out to be what they called an exploratory meeting though what they were exploring remained a mystery at least to me. Again I was kept waiting but their plans were then revealed to me and I was exited and enthralled by what I was told and agreed immediately to join with them to bring their plans to fruition.

Did my Bistro and Jazz club ever open? Well no but you can enjoy its music and ambience twice a week on your television; you will need to provide you own well cooked cheap food and may I recommend you drink just one and half glasses of red wine less would not achieve the right mood and  more would destroy it.