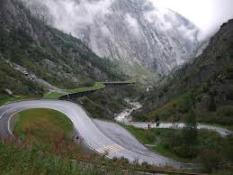 It was during a coach trip returning from Venice that an amusing incident occurred.

We had been promised that instead of taking the tunnel the coach would travel over St. GotthardPass. One couple on the coach were celebrating  their anniversary and at the viewing platform at the top of the Pass they produced two champagne flutes and the accompanying bottle of the bubbly nectar. The wire was carefully removed from the cork and, well, in the rarefied air at that altitude and added to the pressure inside the bottle the poor old cork stood no chance. I swear that the champagne was still bottle shaped as it made it’s escape following the cork on it’s ever upward flight. The couple were left with a mere couple of inches of wine in the bottom of the bottle to drink their toast.