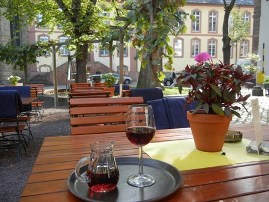 It was on our first foreign holiday as  man and wife that we learned a valuable lesson that has been the watchword for all our later foreign holidays. “You do not go abroad to meet English people”.

In those days our car was not reliable enough to contemplate travelling further than the next county let alone another country unless you were a highly proficient mechanic which I am not. So we booked a 6 day coach tour of the “Romantic Rhine”.

Having spent eighteen months of my National Service at Oldenburg and Schleswig Holstein  it was I suppose a touch of apprehension which led me to choose a country who’s language and food I was familiar and comfortable with.

The coach trip in itself  was a revelation due to the couple behind us who happened to hail from Lincolnshire in itself irrelevant apart from the fact he must have been England’s foremost authority on tractors not one was missed by our doughty tractor spotter and having been spotted was described loudly in the minutest detail. He “entertained” us for the whole journey and was thereafter studiously avoided on all future excursions by the rest of the party. The other amusement of the journey was when my wife loudly commented that the town of “Ausfahrt” must be very big because of the number of roads that were signposted to it.

The tractor man’s wife herself cause some consternation later in the holiday when she announced that it was her birthday and it was a big one. The coach “smoothie” having decided it was her 60th congratulated on her 50th birthday only to be met by a look that could sour milk at forty paces as she informed him she was celebrating her 40th birthday. Exit one very red “smoothie”. To be fair she was the oldest forty year old I have ever seen.

On the journey rule one of how to survive coach travel was formulated. When leaving the coach for a meal stop always be last off and turn in the opposite direction to the rest of the party who invariably head off in a herd. This way you stand a good chance of mixing with the people who actually live there; the people who you have come to see and meet with.

We arrived at our destination Koblenz renowned for the confluence where the Rhine and the Moselle join. Join might be a too stronger word they share the same river bed but the waters of the Moselle are distinctly cleaner than the Rhine and it is several miles before the Moselle loses her virginity and allow her waters to mingle into one colour.

Memories of the Romantic Rhine and Mystical Moselle are memories of the mists being gradually burnt off the Moselle by the early morning sun and the sheer size of the mighty Rhine. Of small pretty flower decked villages kept apart by miles of  vineyards. Of Bad Emms a spa town where you could “take the waters” a few yards from the gents subterranean  urinals, an invitation we declined. It was a picturesque setting for a wine filled relaxing holiday.

The life and soul of the trip was a memorable retired headmistress who had decided to grow old extremely disgracefully. This lady applied her makeup with a skill that even a master plasterer would find hard to achieve. Each evening we would be taken to  a different beer or wine garden each night should would indulge in dancing, usually alone unless there was a local clad in Leder-Hosen available, singing raucous songs and telling jokes of a doubtful nature always at an uncontrolled level of decibels. Later she would have to be helped back onto the coach protesting loudly that the night was young and she wasn’t ready to leave. At breakfast the following morning she was always first to arrive no sign of a hangover, makeup carefully ladled on and during the course of the meal she would go round apologising for any embarrassment her unremembered antics might have caused. One of life’s true characters, one I shall never forget.