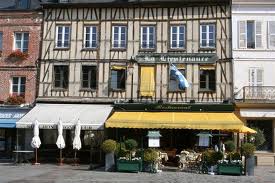 This holiday came about when I mentioned to Sue and Dave that  Gina and I were thinking of taking a holiday in Honfleur. Sue liked the idea it was picturesque, Dave liked the idea there were some decent golf courses at Deauville and Trouville just a few kilometres along the coast

Thus a few weeks later we found ourselves in a house we had rented in the Rue Haute.

Directly across the road from our holiday abode and well within slipper walking distance was the boulangerie where the daily croissants were bought together with the mid morning patisseries to accompany our excursion planning coffee. I always had their tarte au citron and Gina a tarte au fraises.

Some few doors down from the boulangerie was the boucherie the butcher was a proud man who we soon learnt to trust. On the first day I called in to buy some pate for lunch and in a mixture of bad French and Gaelic gestures I made my purchase. I then chose a couple of bottles of wine from his rack of bottles. He asked was the wine to accompany the pate I replied “oui” he took the bottles from me and gave me two other cheaper bottles and in the same mixture of French and gestures indicated that the bottles he had handed to me were far more suitable and also I noticed several euros cheaper. From that day on I chose the meat and pate and he chose the wine.

Behind the house was a long thin garden giving access to another road. Just at the bottom of the garden was a small bar much favoured by the local classic machine motorcyclists their fancy leathers hiding bodies far past the first flush of youth.

Across the road was a long ornamental park much favoured my the local families for their evening promenades. On this park was, as was to be expected, a boule court. One afternoon the girls wandered off to look round a butterfly farm and Dave and I played boule, modesty forbids me to say who won suffice to say that Dave bought the beers in the little bar at the bottom of the garden. Kronenbourg had never tasted so good as on that hot French afternoon. The picture in my memory was completed when the girls having returned called from an upstairs window to get them a couple of drinks. I can still see that tableau in my mind’s eye as clear as if it was yesterday.

It was on this holiday that Gina and I had two of the best meals we have ever eaten. It was at a restaurant called La Lieutenance in the little square opposite the large wooden church.

It was also the holiday when I discovered my liking for calvados.

The picturesque harbour the slightly down at heel appearance of Deauville and Trouville like a genteel family fallen on hard times. Happy holiday, happy, happy memory.