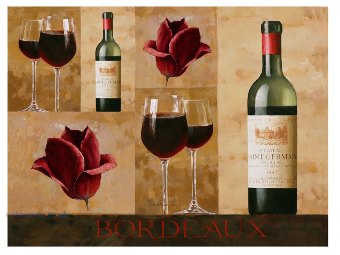 Sitting here with a glass of Grand Vin de Bordeaux (bought by a  friend given to me  for some past kindness I had forgotten) and the lights low firmly grasping my imaginary life rewind button I recall an evening before our friends moved to France. It was our “turn” to go to them and as was our way the events of the evening were good conversation, a simple supper, red wine, which gave Dave being the connoisseur with contacts to indulge his passion, and then a game of “triv”

Now the way we played Trivial Pursuits meant it started off highly competitive but as the evening progressed and the wine bottles emptied it became much less competitive and far more silly each inane answer greeted with gales of laughter but then as Sue recharged our glasses, for the umpteenth time, with a newly opened bottle and we all sipped the ensuing silence was suddenly deafening; this wine was seriously different it was more than a drink to enjoy it was an experience to remember. Dave asked Sue what bottle she had opened Sue told him. It turned out that mistakenly for an ordinary evening this was from a case of Grand Cru he had “acquired” from a French friend with connections in the Pomerol and bought in England, well we just couldn’t have afforded it. But Dave being Dave just shrugged and said well it just proves the other eleven bottles will be good for their retirement party. Sadly an event Gina won’t be here to enjoy. Maybe the mistaken bottle was not a mistake after all.