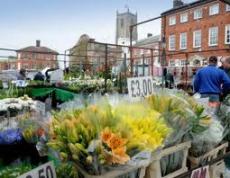 As I gazed out of the window I could see it promised to be that rarest of occasions a rain free market day. The air was still and the early morning sun was burning off the last of the low lying mist from the mill pond.

Orange juiced, coffeed and breakfasted I made my way along the bridle path to the Market Square. The early bird stall holders had finished setting up and were gathered around the refreshment van outside Barclays Bank with their mugs of tea and bacon sarnies whilst the late comers desperately struggled to catch up. The regulars having claimed their pitches and the Market Superintendent, in reality the Town Clerk in another guise, quickly allocated the remaining pitches to “casuals” and “charities”.

Curtain up, let the action begin. 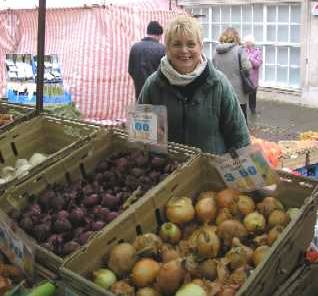 First to arrive in the still early morning are those people, mainly women, doing their shopping on their way to work. These gatherers of food, not at all interested in the wide diversity of the market, head straight for vegetables, fruit, meat and fish and finally to the bright yellow trailer of “The Egg Lady”. None of the normal supermarket definitions here this was the world of not only small, medium, large, barn and free range but of double yolkers and jumbos, of bantams, duck and quail.

Next to arrive are those who travel in by car and the walking distance locals determined to get the pick of the offerings. Later their numbers swell as the coaches and buses arrive in from the outlying villages. There is Maudie getting off her bus, she must have a heavy shop otherwise she would have ridden the three miles in on her bicycle. Many villages have a Maudie, she is the one who walks or cycles along the roads and lanes talking aloud to herself her solitary conversation full of “I says” and “she says”.

There is old Edna bashing everyone’s ankles with her carelessly pulled wicker basket on wheels with its walking stick handle. She must be the most cursed woman for miles around, not that she takes a blind bit of notice.

Swinging down Bridge Street with his shoulder length stave comes a man who I call Bernie. His name changes frequently, altering with every different person you talk to. He has a straggly beard and small round glasses adorn his chubby, cheerful face. In spite of his sixty plus years he swings along with the easy gait of the experienced walker. He is resplendent in black soft leather boots and a French Foreign Legion uniform. Some say he served in the legion and earned the uniform the hard way, others that he bought it in Carnaby Street in his youth in the sixties.

By now there is a constant ebb and flow of people as the locals head for the coffee shops and hostelries and their places are taken by the grockles and second home owners from Chelsea on Sea. These incomers, locally called half sixers, with their cottages in the coastal villages are easily identified by their dress. Quilted green or navy blue body warmers, green wellies and All Black rugby shirts; I don’t know why but whatever the nationality of the wearer the shirt must be the Black shirt with the white feathered emblem. They also head for the green grocery stalls but they are interested in the Asparagus, Ginger, lemon grass and the peculiarly shaped and named vegetables for Oriental and more recently Thai cooking. We, I suppose, have to be grateful to these misplaced people for their presence has added to the diversity of fruit and vegetables on sale but it is still good to buy parsnips and bunches of carrots with the mud on them and potatoes which are not all identical as if they were made on a production line by robots.

No market day would be complete without a visit to the flea market with it’s rows and rows of Bric-a-brac stalls, and miscellaneous stalls where, if you have the time, you can find that must have item that was someone else’s clutter only last week. There are stalls selling DIY and garden tools, shoes, clothes and just about everything one could possibly need providing it doesn’t cost more than a few pounds. Another must is the Nurserymen’s stalls with their rows of home grown plants. The regular locals soon get to know who sells well grown home produced plants and who the fly boys are who are out for a fast buck with their bought in seconds that are not noticeably cheaper than the Nurserymen’s “proper” plants.

A walk through the flea market leads to the half sixer’s next port of call, the Auction Hall. Here local people snap up bargains whilst old kitchen dressers, which will need much love and money spent on their restoration, leave for coastal cottages yielding for their sellers the price of a brand new kitchen.

The auction is the only place that still attracts a few farmers to the market and this, I feel, is out of a habit that refuses to die. There is no reason for them to come other than to have a mardle with old friends. The livestock and dead stock markets finished many, many years ago. Another tradition dead and gone and the market town the poorer for it.

Shopping done, friends talked to, coffee or beer drunk and arrangements made the crowds start to thin as buses and coaches leave and stalls are packed away. The green grocery stall holders, always the last to go, begin to shout out reduced prices as they attempt to harvest the last few pounds for their wares. Soon the dustcarts will arrive to clear away the debris of the day. By early evening all evidence that there has been a market has gone and the town will once again fall back into its slumberous ways.