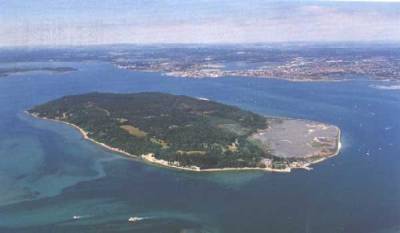 As I stood on the quay at Poole Harbour looking toward the island of magic, dreams and eccentrics I thought of the many times I had stood there before waiting then as now for the first sighting of the Castello as she makes her way towards the Quay to take me and my fellow holidaymakers to Brownsea Island and a holiday break at the Castle.

I have been to the Island in the early spring when the top fields on the south side are covered in daffodils, the remains of an earlier resident whose dreams were torn from him when Isles further south such as the Scillies were able to bring their blooms to market earlier. Later in the spring when the woods are smothered in Bluebells. Still later when the rhododendrons, a mistaken introduction which threatened to take over the Island until they were severely dealt with, make their showy appearance. In late summer when all is woodland walks and variety but this was to be the first visit we have ever made so deep into the autumn. 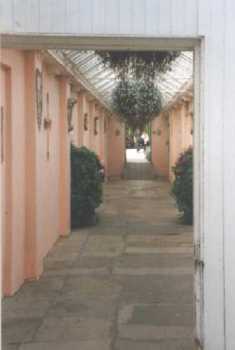 The small boat chugs it’s way carrying eight or nine eager passengers the two miles across the Harbour passing the row of houses on the Island’s foreshore to tie up at the Castle’s private jetty and then it’s a short walk through the covered flower bedecked walkway through the beautifully maintained Italian garden from which you get your first close look at the magnificence of the Castle. The wall on the north side of this Garden is actually constructed so that it has rooms inside it which form part of the staff quarters. Then into the Castle up the flight of carpeted stairs to the opulent rooms above, the morning room, the reading room and the bar on one side and the chandeliered dining room on the other. Truly a different world. 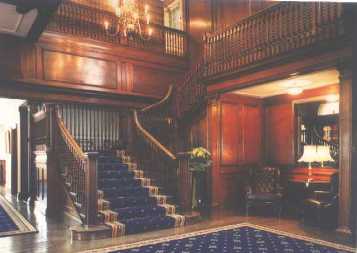 Then it’s a quick trip in the lift to your bedroom, a change of clothes and back down for morning coffee before taking a leisurely stroll before lunch. There are red squirrels everywhere. This time they have forsaken their pine nuts for the more plentiful chestnuts, a more successful introduction. This must be the only place where another introduction, Pea fowl, outnumber all other bird species. A stroll over the green and passed the church takes you to the ruin of the vinery and kitchen garden now completely overgrown, and then it’s back for lunch.

How do mere ordinary folk come to stay here in these surroundings? There is only one way and that is to work for or to be retired from The John Lewis Partnership. It is leased by them from the National trust and is used solely as a private hotel and country club for its staff, past and present.

The Island today is owned by the National Trust and shared by three other organisations, The John Lewis Partnership which has exclusive use of the Castle and several acres of surrounding gardens including a private beach, The Dorset Wildlife Trust which uses just under half of the Island’s five hundred acres as a nature reserve and the Scout and Girl Guide movement. It was on this island that Baden Powell held an experimental camp in 1907 which led to the start of the Scout movement and they still have a campsite on the Island today.

There is history and interesting walks everywhere as you would expect on an Island which has been inhabited since the late seventh century and possibly even before that.
The Island in more recent times has seen owners bankrupted, driven to suicide and becoming recluses but the golden period was during the period that it was owned by the Van Raalt family in the 1850s a period of Edwardian extravagance and lavish entertaining.
The Island has been raided by Norsemen, involved in Piracy, housed a monastery and seen a pottery based on the Islands China clay bankrupt it’s owner.

What of the future?
The worst scenario would be for the Island to fall into the ownership of the likes of the Sandbanks clique who would, no doubt, make it totally private. The best scenario would be for the Island to become the subject of a single trust who’s only interest was the Island. A visionary such as Tim Smit who was the man behind the restoration of The Lost Gardens of Heligan and The Eden Project would be ideal to head it up. Why not the National Trust? Well in my view they have too many irons in too many fires to devote the time, energy and money to this magical place that it needs and warrants. Also I hear that it’s current policy is not to invest further funds to prevent further erosion a problem which has, and will continue to, plague the cliffs on the south side of the Island. Soon some magnificent and mature trees will topple into the sea and that would be a tragedy. The Island still has much history to be discovered and much restoration which could be done, such as the vinery and vegetable garden. The National Trust isn’t, and can’t be single minded enough, to take this work forward and making a magical place even more magical.

So what of our late autumn visit? We had one wet day when going out was just not really inviting so this was spent in the archives reading more of the Castle’s and Island’s fascinating history. The rest of the time was spent exploring from the Maryland ruined village through to the memorial Scout Stone, the old School House and the quayside. Days spent spotting the red squirrels and Sika deer and scuffing through the falling leaves whilst enjoying the autumn colours, marvelling at the number of exotic fruits such as the abundance of fig trees placed in protected corners away from the worst of the English weather and then returning to the splendours of a warm and welcoming Castle to enjoy our meals in its magnificent dining room.

Others may dream of high position and power. Me and many others would only dream of a life on Brownsea Island and living in its Castle. 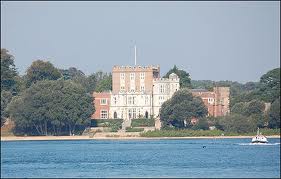