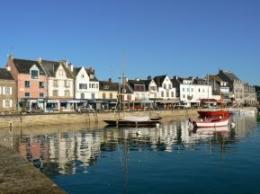 One quiet Sunday morning whilst camping in Carnac on the Brittany coast we, in an uncharacteristic fit of energy, decided to cycle along the coast road to La Trinite sur Mer. This area of Brittany is memorable for it’s menhirs, which march across this region like a stone army, and the way the pine tree clad sandy shore and sea alternate in and out like the teeth of a comb. We set out quite early, well just before lunch time actually, and by the time we reached our destination we were thirsty and hungry. We passed several bars who’s sole aim in life was seemingly to cater for the holidaymaker, not what we were looking for. We settled for what appeared to be, judging by the array of battered pick up trucks parked outside,  the local’s local.

Inside it was plain and simple. Scrubbed tables, creaky wooden chairs, plain wooden floor and about a dozen work dressed fisherman. We had not got a clue about the various drinks on offer so we decided on a cunning plan which we put into action. We waited a while and when one of the fisherman approached the bar I followed and after he had been served I simply said “encore” and gesticulated to the white wine the man had ordered. We sat with our drink and enjoyed the fresh light wine that we had been served. To our surprise the next fisherman when he ordered brought us two more glasses of wine which we thanked him for. After this had been repeated several times we were invited to join them in a communal sea food platter I bought a round of drinks and a very convivial afternoon was whiled away. They told us with a little English, my schoolboy French and much miming that they were “fruits de mer” fisherman and owned the oyster beds on the other side of the large bridge that spans the inlet.

We never got round to exploring La Trinite sur Mer that day and two very unsteady cyclists weaved their way back to the campsite. We could always explore another day. I wonder what the French for mañana is. 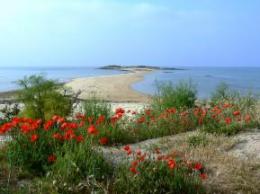