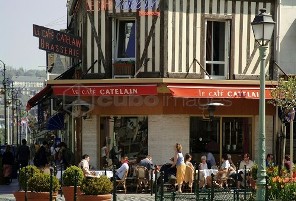 He had sat at cafe tables in Avenues, Streets and Boulevards all over Europe. His favourites were under the Plane trees in small French towns sipping coffee or maybe a Pernod or even both.

But today he was in England at a pavement table in a warm city centre square sipping black coffee. People watching and lost in reverie.

People watching was a favourite indulgence. Imagining their lives their joys and their sorrows all added to his pleasure.

Take that couple over there a Grandmother and her Granddaughter without a doubt. The old lady careworn but still sprightly enough. The young girl sparkling eyes as yet undimmed by disillusion.  Now what were they about? Buying uniform for the new school year? A trip to the dentist? A last outing before the return to school? What about the girl’s parents was she the daughter of a single mum? Were her parents both out at work struggling to earn the money that would never replace the affection the young girl craved and yearned for? Thank goodness for Granny.

His eyes left the couple and picked up on a group of “ladies who lunch”. All giggles and loud look at me laughter. The sort, he thought, who liked to refer to themselves as young professionals, although, to be fair, a couple of them looked to have been around the block a few times. He could imagine them out clubbing all thongs and indecent amounts of bare flesh chucking up in a drunken stupor. They were arguing as to which establishment was going to have the pleasure of supplying their granary roll and lettuce leaf. Truth to tell, he thought, it didn’t really matter the cafes and bistro that catered for the lunch time trade struggled mightily to be different but always seemed to manage to end up looking the same.

Their “aren’t we wonderful” attention seeking failed to hold his interest. Inane was the word that came to mind.

He spied a real character; a bag lady foraging for scraps of food. I bet she has a few stories to tell he thought. Carefully he wrapped two of his sandwiches and gently placed them on the top of the next bin she would come to. She saw what he was doing and with a toothy grin scooped up the package and made off. His imagination worked overtime. Was she a famous actress fallen on hard times, an abandoned wife of a violent wife beating gambler or maybe a poor unfortunate victim of the so-called care in the community scheme? Where had it all gone wrong for her?

He had just started to day dream her story when a painful finger prodded him in the shoulder and a voice straight out of a late night Glasgow Bar said. “Hey youse you’re staring at my Girl” He looked round at the owner of the voice all aftershave and attitude. It took him some time to spot the reason for the outburst, a waif like creature who was standing near the bin where he had put the sandwiches. The belligerent character straight out of an Ian Rankin novel seemed to be inquiring about his liking for hospital food but having impressed his girl enough for the time being was now swaggering his way down the pavement.

His eyes lit on a youngish man who, pencil in hand, was reading a book, then closing his eyes and mouthing words. Now he thought what was this all about. Was the man an author engaging in a re-write? An actor learning his part? Maybe he was a famous songwriter working on a new lyric. He looked again at the man searching for clues. Scruffy corduroy jacket seemed to suggest he was not very successful, but hold on if you were successful in a creative way you could please yourself how you dressed so it didn’t follow that he was not successful. An actor then? Could be and then the pencil would be for marking his part in the book which was obviously his script. But surely if he was marking a part a stabilo would be much better than a pencil. Then again all the same clues would fit an author re-working his story but he felt there would be a bit of foot tapping or finger snapping if he was a songwriter. Mind you he thought it could be a teacher working on a lecture. Looking again at the man and his lack of charisma he mused that that was probably nearer the truth. He stifled a chuckle as he thought that his class was to be pitied if he was as interesting as his appearance suggested.

Lunchtime was nearly over and the tables started to empty and the first drops of rain begun to fall. All in all he had had better days of people watching but there again, he had had a lot worse.

Trouble was England lacked the vibrancy, colour and glamour of say a Paris or Barcelona.

Still he could wait it was only three weeks to his holidays.