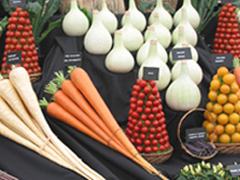 It’s a Summery day in September. The sun is doing the day of the horticultural show proud and the forecast is for the blue skies to last until nightfall. All over the village members of the horticultural society are preparing their chosen exhibits for the various flower classes with care bordering on the paranoid. Cotton buds, small make up brushes, tweezers and scent sprays are being put to uses that they were never designed for. The vegetable growers are busy trying to find three matching carrots worthy of a prize. In other village homes the cooks are baking, decorating and studying schedules. This year each and every one of them determined to beat their various archrivals. Children in this village are not left out, some are carefully crafting their entries for the handwriting competition, others are making miniature gardens on dinner plates, no more than 12  inches across. Still others have painted their entry for the “Village Scene” competition, entrants to be 17 or under on the first of September. In still other homes embroidery is being checked, jars of jam given a final wipe and the labels checked, photographs for the “Countryside at Harvest ” being critically scrutinised and an atmosphere of anticipation and excitement pervaded many of the village homes. Mind you, the old-timers will tell you, it’s nothing like it was not since all those incomers and second homeowners moved in. They bloody contribute nothing and moan about the village ways, they should be slung out the lot of them. Never was, never will be much love lost between the old village families and the new folk, mind you it would help if the new folk didn’t consider themselves superior to the village “yokels”.

In an apartment in an old mill several miles away a man is also preparing for the show. For more years than he cares to remember he has judged the home made wines classes. Four classes in all dry red, dry white, sweet red, sweet white. He prepares the tools of his trade a bucket to spit in, the special glasses to peer in, sniff at and sip from and the judging sheets divided into the various categories

Adding a couple of tea towels and a cork screw for those entrants who couldn’t read the schedule.

He remembered past shows when there was a class for wine from unusual ingredients. A very acceptable Yorkshire pudding wine was fondly remembered and the memory of wines he referred to as the foul three brought an involuntary shudder A wine made from tomatoes, a wine made from grass cuttings on which he had added the comment “if you must make wine from grass clippings make sure your dogs hasn’t got there first” and a wine concocted from some indescribable ingredient which had brought forth the comment of “congratulations on proving that Fairy Liquid is fermentable”. Not that he was a vindictive man but he did draw the line at attempts to poison him.

He was ready at last and he departed in time for his 11 o’clock appointment.

At  11 o’clock sharp he and the rest of the judges each equipped with the tools of his trade skewers, magnifying glasses, kitchen knives and tape measures to the fore. As he entered the hall the last of the competitors was leaving. Old Jack flicked a final cloth over his giant marrow as the wine judge said, as he did every year, that’s a fine looking courgette you’ve got there Jack and Jack replied as always with a grin and a single expletive.

Pleasantries were exchanged with other judges offers of a slice of Victoria sponge for a glass of wine were jocularly made. Finally the serious business of judging started and this really was serious business, not only were the competitors under scrutiny but so were the judges. The standard of their judging would be discussed at length when the competitors returned and again later when the public were let in.

The exhibits were checked for conformity to schedule, ullage was measured, the brightness examined, bottles checked for dirty marks, labels checked for straightness. Next the big two bouquet and taste. Marks were noted down and then added.

At last he finished his four classes 1st 2nd 3rd and highly recommendeds awarded not forgetting the all important “Best in show“.  He was free to have a wander round the other exhibits. The show’s standard was very high as usual but again the number of entries was down. It was only last year that one of the weekenders had entered some potatoes bought in the supermarket as a bit of a hoot, his sense of humour went down like a lead balloon and later that same day his cleaner handed his key back saying she wouldn’t be cleaning for him again and he had never managed to find a replacement. Taking the piss out of village ways and traditions was no way of endearing yourself the Chairman of the Horticultural Society had bluntly told the miscreant in no uncertain terms.

The wine judge told the Treasurer to donate his fee and expenses to his favourite charity and prepared to leave. For him the show was over. The afternoon would bring pleasure to some disappointment to others and an event that was laughingly referred to as a fete worse than death. Judges rarely stayed to meet the public and competitors it seemed prudent to steal away their job done for another year.