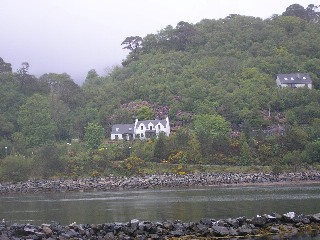 It was on a  spring holiday in Wester Ross and the Isle of Skye that we came upon Herr McFlic. The weather was well – Scottish but the scenery was ruggedly magnificent and we were more than pleased with our choice of holiday and of course there was the diversion occasioned by Herr McFlic Scotland’s answer to Basil Fawlty. He was our hotel’s Head Waiter, a young man from Perth, who was christened Herr Flic by one of our party almost from day one.

I will mention but three of the many incidents.

The first occurred on the evening of our arrival. There were 36 in our party to be seated at a mixture of 4 and 6 seater tables. We entered the Dining room to be ”greeted” by Herr Flic who proceeded to issue orders as to who would sit where with no regard to the parties wishes. Two couples who were in our party were sisters travelling with their respective partners, one pair from Cardiff and the other from Bristol, these Herr Flic split up on two different tables. The couples concerned agreed to move so that the two sisters and their partners could share the same table. This did not suit the confrontational Herr Flic.
“Can you move back to your proper tables” says Herr Flic.
“Why?” Say the couples.
“Because the restaurant will be full tonight and I have carefully worked it all out” says Herr Flic
“But we won’t be taking up any more tables will we?” Say the couples.
“But your food might be delivered to the wrong tables.” says Herr Flic.
“We haven’t ordered any food yet so how can that be?” Say the couples.
At this point the partner of one of the sisters suggests consulting the manager at which point Herr Flic hastens away.

The second incident I will mention happened at breakfast a couple of days later. One of our party approaches his table having collected a glass of fruit juice on the way. Herr Flic approaches him.
“Can I take your order?” says Herr Flic.
“I’m not ready to order, I‘ll let you know when I am” says the guest.
“I might be busy then” says Herr Flic, “you’d better order now.”
“I told you I’m not ready to order yet I am waiting for my wife to join me.”
“What would you like to order for her?” says Herr Flic.
“I don’t know what she will want until she gets here, we will order when we are ready and not before.“
“What does she usually have?” asks Herr Flic.
At which point it was firmly suggested that Herr Flic might care to take a running jump.

The third incident I shall refer to related to our own table. On our six seater table three or our number all seated together at one end of the table had ordered Carbonara, done I might add with pasta shells rather than the more usual spaghetti. At the other end of the table the remaining three of us had gone for the roast lamb. Enter Herr Flic with two tureens one filled with boiled potatoes the other with roast potatoes and he puts them down at the far end of the table. These tureens we had discovered during the time we had been staying could be very hot.
“Can you put them at this end” we ask.
“No I’ll leave them here they’ll be passed down when these guests have taken what they want, I’ll bring more if needed.” says Herr Flic.
“But we are having carbonara we don’t want potatoes” say the far end guests.
“You might change your minds” says Herr Flic and scuttles of before anything else is can be said. Fortunately Sergui, one of the waiters heard the “debate” and after Herr Flic had departed came over and, with a knowing smile, moved the tureens to where they were needed.

No recollection of our holiday would be complete without recalling the evening entertainment. Why oh why given Scotland’s rich musical culture did the hotel book so many nasally impaired, guitar strumming Country and Western performers? No I refuse to call them singers they would all have struggled on a tone-deaf karaoke. evening. There is only so much lying blankets on the ground and crystal chandeliering one can put up with. That was on five nights on the other two nights we had a young piper of whom the head barman (a Scot) said “we rang the RSPCA but they said that puir wee animal was beyond help ye ken.” But the remaining night restored our faith. A traditional Scottish folk singer resplendent in full dress regalia entertained us with songs, poems, historical explanation of Highland dress and traditions and jokes and repartee. This will be the night we remember along, of course, with the antics of Herr Flic.